(Disclaimer: Spoiler alerts ahead. If you haven’t seen some / all of these films, turn away and go watch these awesome films!)

The story line: In a countryside town bordering on a magical land, a young man makes a promise to his beloved that he’ll retrieve a fallen star by venturing into the magical realm. Lamia is the delicious wrench in all hero Tristan Thorne’s plans. And she’s deliciously fun to hate. She cackles, she cracks jokes, she has a little naughty fun with her magical abilities. And just when you think she’s feeling remorse and she moans and wails that it’s all just too hard and they should just leave her to her grief, she laughs at Tristan and Yvaine’s gullibility and then proceeds to break a bunch of glass and stuff. What I love about Lamia is that she has fun with her bad self. And she has a decent motive for why she wants to thwart Tristan’s plan: if she cuts out the star’s heart, she’ll regain her powers, her youth and her immortality. Her primary motivator is vanity, which is a refreshing change from the usual power / money that most villains desire. And it makes for some awesome jokes. And since the film is based on Neil Gaiman’s bestselling novel, you know the wit’s going to come out in full force. Love this movie!

The story line: An FBI agent goes undercover to catch a gang of bank robbers who might be surfers. Once we peel back the layers and discover Bodhi’s identity as the leader of a gang of surfers who also moonlight as bank robbers, we realize there’s a lot more going on than just greed for cash. He’s got a deep-seated hatred toward establishment and government. He feels it so much that he risks everything for his ideals. On one level, the hero, FBI Agent Johnny Utah, truly admires this conviction in Bodhi. And in quieter, reflective moments of the film, Bodhi’s explanations and revelations do appeal the viewers as well. So when Johnny repeatedly lets Bodhi get away with his crimes, we understand where he is coming from. This is when you know you’ve got a three-dimensional villain. Their reasons for acting the way they do are justifiable, at least to them anyway.

Interview with a Vampire

The story line: A vampire tells his epic life story: love, betrayal, loneliness, and hunger. Another fun villain that you love to hate but somehow don’t really hate after all. His smug confidence, his absolute surety in his superiority, and his disdain for how Louis clings without hope to his lost humanity define his character. What makes him three-dimensional and unforgettable is his brother-like love for Louis. He’s intrigued by Louis’s beauty and tragedy. Anyone would be, but it surprises us that a flippant and arrogant vampire like Lestat could see through to Louis’s complex character depth.

The story line: Fledgling writer Briony Tallis, as a 13-year-old, irrevocably changes the course of several lives when she accuses her older sister’s lover of a crime he did not commit. Based on the British romance novel by Ian McEwan. I really loved hating Briony through most of this film (and the book too). Briony lives in her head. She lives for the thrill of her fictional fantasies. And in the end, it destroys her sister’s life and the life of the boy she falsely accuses of a crime. She knows she has no proof and yet she accuses him anyway. But in this film, we see all sides of every moment. We turn back in time and see what Briony witnesses and how everything could seemingly appear as if he had committed the crime… if you are a 13-year-old girl given to fanciful daydreams.

The story line: When a Roman general is betrayed and his family murdered by an emperor’s corrupt son, he comes to Rome as a gladiator to seek revenge. Ah, Commodus. I just want to punch him when I watch this film sometimes. He’s so creepy and slimy and incestuous. Ugh. And I do love to hate him. But as the film progresses, we learn that he feels inferior to his father. He is jealous of Caesar’s war successes, of his conquests, of his power. He wants to be his father, not just succeed him. And that desire makes us feel empathy for him. We still despise what he does to Maximus, our infallible hero, but we understand his motives. It doesn’t it excuse his horrific acts, but it makes our hatred burn less bright.

The storyline: In 1933 New York, an overly ambitious movie producer coerces his cast and hired ship crew to travel to mysterious Skull Island, where they encounter Kong, a giant ape who is immediately smitten with leading lady Ann Darrow. Amazing that a CGI character can breathe such life into a monster. Not only that but the writing team of Jackson, Boyens, and Walsh along with Peter Jackson’s signature directing style made this classic story so much more than we’ve ever seen before. King Kong is at its heart a love story between a beauty and a beast. And it’s a commentary on a great many other things besides, but what we’re talking about here is what makes King Kong a great villain. He might be a monster who kills man and beast, but when he sees Ann Darrow, we discover he has a heart. A heart that loves, that desires to protect. And we see this through his actions and his facial expressions and not much more, because he cannot speak. In the end, love comes down to action, not words. Right? And this film shows this truth through the love a monster.

Tess of the D’Urbervilles 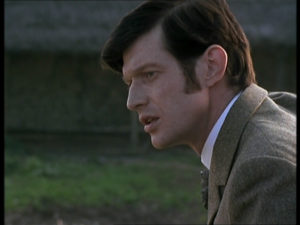 The story line: Free-spirited yet naïve, country girl Tess, is caught between her wealthy, manipulative, “cousin” Alec and the handsome, educated, farmer Angel Clare, in this Victorian tragedy from novelist Thomas Hardy. I’m watching this film as I write this. A lot to say about this story, about its illustration of class struggles, of gender inequality, etc., etc. But Alec, the manipulative cousin, is who we’re highlighting at the moment. He is such a selfish, horrid creature. But he’s also the perfect force to push Tess’s story along its tragic course. He takes and teases and torments with no thought of consequence for virginal and innocent Tess. But he is not wholly bad. I dare say he loves Tess, though, it is more obsession really. Or rather, the kind of love only a cruel person could show. The tragedy of Alec’s love is that it imprisons Tess at every turn, and it’s heartbreaking to see someone so innocent fall so low through no fault of her own.

Phantom of the Opera

The story line: A disfigured musical genius, hidden away in the Paris Opera House, terrorizes the opera company for the unwitting benefit of a young protégée whom he trains and loves. We learn the tragedy of the Phantom’s early life not too far into the film, and this gives us the glimpse into his past that we need in order to root for him. And, oh, do we. This has been one of the most beloved characters ever written. And it’s because we feel a mix of sorrow at his circumstance, awe at his talent, and his unflinching love of Christine. We love stories of underdogs, of talented people rising to the top on their merit. We dream of stories where the loser gets the girl. In some ways, this story is a tragedy and the Phantom is the actual hero. He’s most certainly the hero to me, despite his flaws.

The story line: A boat has been destroyed, criminals are dead, and the key to this mystery lies with the only survivor and his twisted, convoluted story beginning with five career crooks in a seemingly random police lineup. This moment right here made every moment in the film worth the time. The first time I saw this film and saw this shot of the walking shoes, I gasped allowed and I think my brain blew a gasket. It was the big pay off moment and it came out of nowhere for me. What was your reaction when you saw this scene at the end of the film? Never has a simple shot of a pair of shoes had more meaning (nope, not even Dorothy Gail’s red ruby slippers. The plot balances on a single question: Who is Keyser Soze. And every single character creates a new myth around this mysterious and dangerous man. The cast of characters are deeply drawn and everyone is a suspect and a pawn in the ultimate game. And when you find out in this walking shoes moment just who Keyser is, well: mind = blown.

Lord of the Rings “trilogy”

The story line: Gandalf and Aragorn lead the World of Men against Sauron’s army to draw his gaze from Frodo and Sam as they approach Mount Doom with the One Ring. What an amazing character Tolkien has written, eh? He’s seemingly the most insignificant character in the Lord of the Rings, but in the end, he affects the fate of all. And he’s got a split personality, in a sense half-possessed by a demon of evil. He is a case study in what can happen when we let evil reside in our hearts. Part of what makes fiction and film such teachable mediums is that we get to see where other paths lead. If we choose this ideal or this vice, what would happen? What would be the consequence or result. And so we see this play out before us in Smeagol, as the One Ring slowly poisons his mind into Golum. So there you have it: my top ten best movie villains. What say you? You know you want to tell us who your favorites are.