What risks would you take to be who you really are?

Geek Rhoe and Surfer Ashley would never be friends.

Even if they lived on the same planet.

But, they’ll become so much more.

Earthling Ashley’s world revolves around winning daily popularity contests at Beverly Hills High School and surfing competitions with sweet scholarship prizes that will finally help her break free of her control-freak mother. Ashley never loses. Ashley never wishes on stars. But that changes when her senior class takes a field trip to the Griffith Observatory where Ashley’s conflicting feelings about her predatory best frenemy Tiffany, throws Ashley’s carefully-crafted Queen of B.H.H.S. title under the bus.

Meanwhile on planet Retha, Rhoe misses his dad, loves his mom’s home-cooked Glechy crag with a side of Ory sauce, is desperate to heal his sick brother and wants more than anything to win The Retha New Invention Competition. He and his best friend Yuke have worked for the past two years constructing the teleporting telescope Rhoe started building with his dad before an accident killed him. Rhoe’s never kissed a girl. Rhoe’s hero is the eccentric physicist, Ramay. But that changes when the telescope teleports Rhoe across the universe with an unintended side-effect. Ashley and Rhoe transfer––swap lives––when they make the same wish at the same time.

Popular-surfer-turned-boy-geek alien Ashley must handle life on Retha as Rhoe complete with webbed feet, low-gravity, and an obsession with Yuke, all the while being hunted by Rethan spies and resenting her hairy, flat chest. Boy-geek-turned-popular-surfer Rhoe must fit in at Beverly Hills High School as Ashley, compete in The Laguna Beach Invitational without becoming shark food, dodge boys’ affections, cool his preoccupation with Tiffany and his new body, on his quest to find the healing rocks he believes will save his brother’s life.

If only it were that simple. Some wishes can’t come true. Some have to. How far would you go for someone you love?

[written from Ashley’s POV about her obsession with Rhoe’s best friend, Yuke.]

Yuke catches up to me. We walk side-by-side in silence through the Golden Meadow. The airboard launch, a sort of gigantic upside-down slide, peeks over a row of Truffula Trees.

“Listen, there are three things you have to remember about soaring. You’ll never soar if your mind is on the ground. Put it up on The Ridge,” Yuke says, pointing to a purple-blue mountain ahead of us. “Rhoe taught me that.”

The way he says Rhoe I know it’s happened. He knows. He really knows I’m not Rhoe, I’m…Ashley. It’s sunk in. Finally. I stop walking and can hardly breathe. It’s the first time he’s ever seen the real me, and his gaze warms me down to my frog-feet. Yuke spots the question in my eyes.

“The Ridge of No Return,” he says with a small smile, “It’s the prime place to catch air. But beware The Devil’s Grip. Soar too high and you’ll be caught in The Grip and lost to The Other Side. Forever.”

He misreads the question in my eyes. Again. I shiver thinking about The Grip and dying in the mythic ice and snow of The Other Side. I stare at my hideous frog-feet, my peds. I don’t care about The Ridge. There’s only one person I care about. One boy I’ll never have. Yuke.

“What else?” I ask, peering deeper into Yuke’s alien eyes.

“You’ve got to feel the beat of the wind in your peds. Surrender to the air. And know, deep in your hearts, no one is its master.”

I hear and don’t hear every word Yuke says. For the first time in my life I can’t speak. I can’t take my eyes off Yuke, now that he knows I’m not Rhoe. He wouldn’t be telling his best friend, an Astral, how to airboard unless he knows I’m Ashley, someone who doesn’t know much about soaring.

“Your catchers will always stop you if you fall,” Yuke says, filling the silence between us. He raises his arms above his head. Delicate wings expand out from under his arms. Thin pinkish-purple skin stretches over delicate, long bones. No feathers at all. Just smooth, glimmering skin. And it’s crazy. A week ago I wouldn’t even look twice at a guy with a big nose, but now, I’m hot for an alien. With wings. He’s that hot.

I have to touch him. It’s beyond wanting to. The way Yuke spreads his wings makes his pecs flare and his biceps seize. He’s beyond gorgeous. The way his sheer wings take to the breeze makes Yuke more unreal than he already is to me. He’s everything I never wanted and everything I can’t live without. It feels like we’re the only souls in the universe. The look in his golden exotic eyes melts my ability to stay away from him.

“You can’t be real,” I say taking a few steps closer to him, holding my hand out to touch his wing. Waiting for him to let me. To know it’s OK. He flexes and lets his head fall back a little inviting my touch. I lay my alien fingers on his smooth taught skin, and run them over his wing’s thin hollow bones. My eyes fill with tears. His wings flutter in a breeze. He’s beautiful.

Yuke sticks his chest out and when he drops his arms his catchers vanish back into his biceps. “I can’t let you soar. Not now,” he says, the crowd cheers just beyond the trees.

Only then do I remember where we are. What we’re here to do. A band begins to play a set of songs. The crowd beyond the row of trees cheers again and again.

Yuke puts his hand on my shoulder. I shudder.

Yuke’s golden eyes focus only on mine, on the Earthling inside of this alien body.

“And for you,” I say, feeling the beat of my hearts in my throat. “We’re going to win this damn thing.” 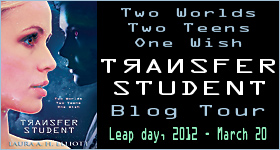 TRANSFER STUDENT is the latest novel from Laura A. H. Elliott and will release on Amazon and Barnes & Noble March 20th.

Here’s how to enter to WIN A TRANSFER STUDENT EBOOK here today! Just follow @Laurawriting and tweet: [leave a comment here on this blog with your link– Winner announced here tomorrow!]

Laura A. H. Elliott loves writing about enchanted road trips, birthday gifts that are out of this world, and alien romance while eating lots of popcorn. She’s the author of Winnemucca, a small-town fairy tale inspired by her life-long love of a little-known town, Avenal, CA, and her equal love of enchanted teenage road trips. 13 on Halloween is the first book in the Teen Halloween Series. 14 on Halloween, book 2 in the Teen Halloween series, will be released in the summer of 2012. Her new release, TRANSFER STUDENT will be available on Amazon and Barnes & Noble March 20th.

To find out more about Laura’s upcoming books, visit her blog Laurasmagicday: http://laurasmagicday.wordpress.com/ or @Laurawriting.