What’s The Truth About Letting Go? Enter for a Chance to #WIN

“If you’re a fan of Sarah Dessen novels, you should definitely pick this one up.” –Harley Bear Book Blog

“Rarely have I read a book like this one that felt so real it could be true.” —Steph’s Book Reviews

“You are drawn into the story straight away and begging for more and left in tears when it is all over.” —Totally Bookalicious reviews

“Honest and raw; filled with faith and heartache—and I loved every minute of it. I was reluctant to see it end and sad to say goodbye to such an amazing cast of characters.” —5-star Goodreads Review

Whether you’ve read the bestselling companion novel The Truth About Faking or not,

Take a trip to Shadow Creek… 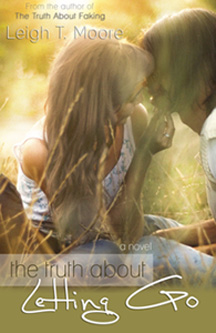 I picture myself climbing up, up, up… to my old position. I’m losing my breath like Charlotte climbing the smallest hill.Back to the top of the social ladder.

The Truth About Letting Go

Ashley wants to smash everything in her once-perfect life.

Colt wants to turn Smalltown USA on its ear–with Ashley at his side.

Jordan wants to follow his heart… but Ashley is the one sacrifice he never expected to make.

Up until now, Ashley Lockett has always followed the rules. She’s always done the right thing, played it safe, and then her ideal life is shattered when her dad dies suddenly.

Fueled by anger and grief, she vows to do everything opposite of how she lived before. She rejects safety, the rules, faith, and then she meets Jordan.

Jordan has big dreams, he’s had a crush on Ashley for years, he’s a great kisser… but he’s also safe.

Enter Colt. He is not safe, and he’s more than willing to help Ashley fulfill her vow.

I feel Colt laugh, and he looks down into my face. That’s when he seems to realize what I’ve been acutely aware of for the last several minutes—our bodies are pressed together.

I’m not sure if he’s going to kiss me until he does. His mouth covers mine, and I grip his shirt so I don’t collapse. Every single bit of this is wrong, and there’s no way I’m stopping it. It’s back, that good feeling. The sadness has been pushed out again, and in its place is this rush, this rush of adrenaline like Colt said.

He pulls back and smiles at me. “We’re going to start dating. Now. You’re my partner in crime.”

Get The Truth About Letting Go today:

She is an award-winning journalist and editor, who has also worked in marketing and public relations for many years. Her writing has appeared in newspapers and magazines across the southeast and Midwest U.S., and she runs the popular writing-craft blog That’s Write.

A southern ex-pat and beach bum, she currently lives with her husband, two young children, and one grumpy cat in the Midwest.

Read excerpts of her books on Wattpad and Figment!